Russia has struck a bold blow against freedom and democracy in its most threatening form: The Internet meme.

The Russian government’s media bureau Roskomnadzor announced this week that Internet memes depicting celebrities are illegal if they don’t represent the celebrity’s personality.

Thankfully, this has no bearing on unintentionally hilarious photos of Russian President Vladimir Putin fishing, hunting, and riding horses while shirtless. Sadly, it could have a chilling effect on brilliant permutations thereof: 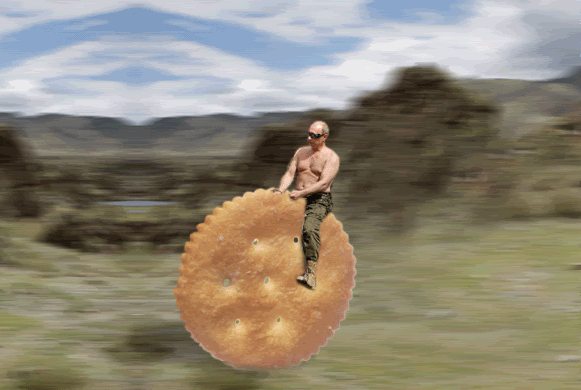 But not in the good old USA, where we can ridicule our leaders (and other celebrities) with impunity, unless there is money at stake.

The announcement isn’t a new law, but a clarification of an existing policy of no fun for anyone, ever, under any circumstances not mandated by the state, especially if you’re gay.

“These ways of using [celebrities’ images] violate the laws governing personal data and harm the honor, dignity and business of public figures,” reads the policy announcement from Roskomnadzor, obtained by the Washington Post.

Apparently, the recent flap over meme censorship was sparked by a Russian singer’s lawsuit over a series of image macros that paired his face with another artist’s lyrics.

We await the massive s*** storm of memes that will flood the Russian Internet in response. Or at the very least, a new Pussy Riot song condemning Moscow’s blatant censorship.