"Switzerland" At the Geffen Stars a Wondrous Laura Linney! 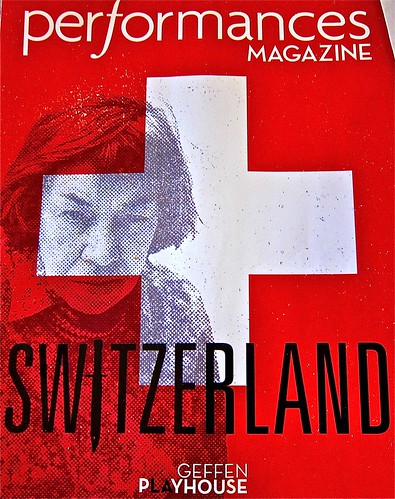 all photos by Michael Lamont for the Geffen

I have visited Switzerland a half-dozen times in my life, mainly to ski and socialize in St. Moritz and to dine at what was once considered the finest restaurant in Europe, therefore the world. Fredy Giradet was in Crissini, near Lausanne, and when he decided to close the restaurant and retire, I stopped going. The country was always somewhat sterile, both the place and most of the 8 million people. Their biggest claim to fame was that they always practiced ‘armed neutrality’ and never went to war. Only we learned later that they secretly financed much of the Nazi Germany war machine, and collected money and gold from its victims. Their banking system was supposed to be inviolate but that too has proven to be a myth, as you can see from current headlines in the Wall Street Journal. The wealthiest nation in the world, they were the last Western country to give the vote to women. 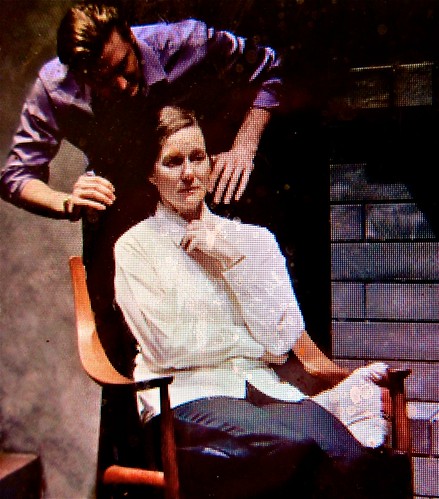 But I visited Switzerland again last night…..or rather, I visited a highly-dramatic play called “Switzerland,” which opened for a limited run until April 19th at the Geffen Playhouse in Westwood (10886 Le Conte Ave. (310-208-5454). And I had one of the best playgoing experiences of my life. (Sorry David Mamet). It was a two-character play starring Laura Linney and Seth Numrich. I have been enamored of Linney ever since I first saw her many years ago on the Broadway stage. Her introductions to Masterpiece Theatre make Downton Abbey even more enchanting. I did not know the young man playing opposite her (Broadway’s War Horse) but now that I do, I will be looking for his next outing with expectation. 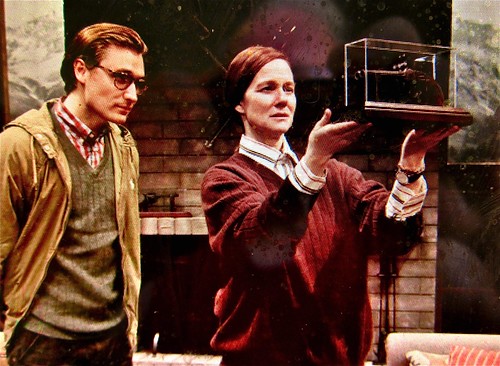 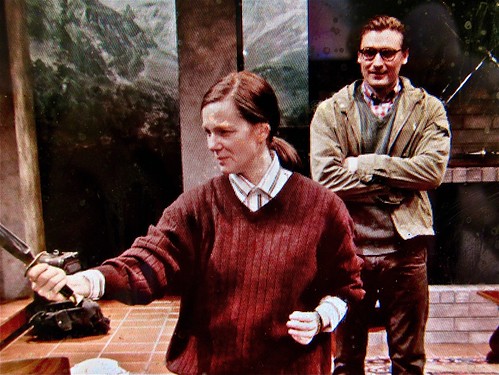 …and her knife collection.

Be forewarned, this is an exciting, unusual, suspenseful and totally off-the-wall theatrical experience. If you don’t know who Patricia Highsmith was, I will enlighten you now so you can have a better understanding of what will transpire. She was a famous, even legendary, foul-mouthed lesbian novelist who wrote some of the best thriller fiction of the last hundred years. Her first novel, Strangers on a Train, was made into a very successful noir thriller by Alfred Hitchcock. If you are of a certain age, you probably saw the film version of her first Ripley novel, The Talented Mr. Ripley, which starred Matt Damon as the smiling, smooth killer of the title. That’s enough to get started for now, but I will continue to illuminate you later about this remarkable woman.

A word about the playwright, a brilliant Melbourne, Australian woman named Joanna Murray-Smith who has now had three of her plays performed at The Geffen. One of them, The Female of the Species, starred Annette Bening (Warren’s star wife) as writer Germaine Greer, and was just superb, as was The Gift. This new play was incepted by Randall Arney, the playhouse’s Artistic Director, and the Edgerton Foundation here funded its development. The co-world premiere of it was held recently in Sydney, Australia with Cate Blanchette’s theatrical company. (No, Cate didn’t play the lead, although she would have been great in it.) I have no doubt that this new production will be wending its way to Broadway (or a top off-Broadway theater) shortly. I also think it will make a fascinating claustrophobic feature film or cable movie.

Okay, enough of the setup. We open on a serene chalet (set design perfectly done by Anthony Fanning) in Tegna, Locarno, in the Swiss Alps in the early Fall of 1994, where Highsmith has retired to hibernate and drink her way into oblivion. The doorbell reveals a tall, somewhat gangling young man, Edward Ridgeway (Seth Numrich) who she sort of expected…sent by her publishing house to try and induce her to write another Ripley novel (there have been five.) The battle of wits begins…..tense and humorous by turns….an intellectual and psychological contest worthy of the gods. Patricia does not want to do it…..and he is determined that she will sign his contract and agree. He has steeped himself in her many novels and begins to haltingly make his arguments. She rejoinders with expletives and racist palaver…yes, she hates Jews, Catholics, blacks and New York in equal measure. The director, Mark Brokaw, has set a fast-paced rhythm for the action so already we all were sitting on the edge of our seats (in the smaller Audrey Skirball Kenis Theatre here) trying to catch every word of the scintillating spitfire dialogue between the two equally-matched (I thought) opponents. Much humor comes from her biting assessments of contemporary literary figurs, ie. Norman Mailer, Tom Wolfe and Kurt Vonnigut. Amd, oh yes, Patricia has a little hobby…she raises snails. The lighting designer ha a wonderful name: Lap Chi Chu, and he costumes were by Ellen McCartney (no relation), while John Ballinger was the composer.

If I had to select one word for the early scenes (there is no intermission) it would be ferocious. She is resisting, eager for him to take his papers and leave, but first he has to unpack some objects she had requested from the publisher when learning an emissary was coming. Cans of mushroom soup and packaged shirts are only the tip of the iceberg. (She has a wild collection of ancient and new weapons.) Randall told me that the playwright was insistant on adhering to what we know of the real Highsmith (who was born in Texas in 1921 and died alone of cancer in Switzerland in 1995.) The result is an intoxicating and sinister mix of historic accuracy and our collective imagination. Oh, my, yes….our collective imagination….but no one in the audience (certainly not me) could have guessed the suspenseful outcome of this wild piece. This young man with a darkly seductive agenda may well be the most potent force she has ever had to deal with. There’s a kind of running joke, which then gets unfunny, about the the song, “HappyTalk,” from South Pacific. I was fascinated when the old crime master and the young stranger began to improvise a story to each other….an homage to the very kind of novel which she made famous. “Love is what interest me, And love is indivisible from murder.” Utterly brilliant.

It was the great Graham Greene who said of Highsmith, “She is a crime novelist whose books one can reread many times…a writer who has created a world of her own…a world without moral endings..nothing is certain when we have crossed this frontier….her characters are irrational, they leap to life in their very lack of reason.” I read an interview where the playwright said that Highsmith, like all of us, suffered from demons not of our own making. “She had endured a very difficult upbringing – no father, an over-controlling but emotionally-distant mother, a disliked stepfather and proximity to great sadness and cruelty in her New York life. My own feeling about Pat is that her cruelty was a defense mechanism to protect herself from the suffering and damage she was well-acquainted with – and she managed to exploit that defense mechanism with her powerful imagination and create a potent and dark body of work, much of which is brilliant.”

All of which this brilliant playwright has captured in this stunning theatrical work at the Geffen. You are in for a treat..but please don’t reveal the ending to anyone.