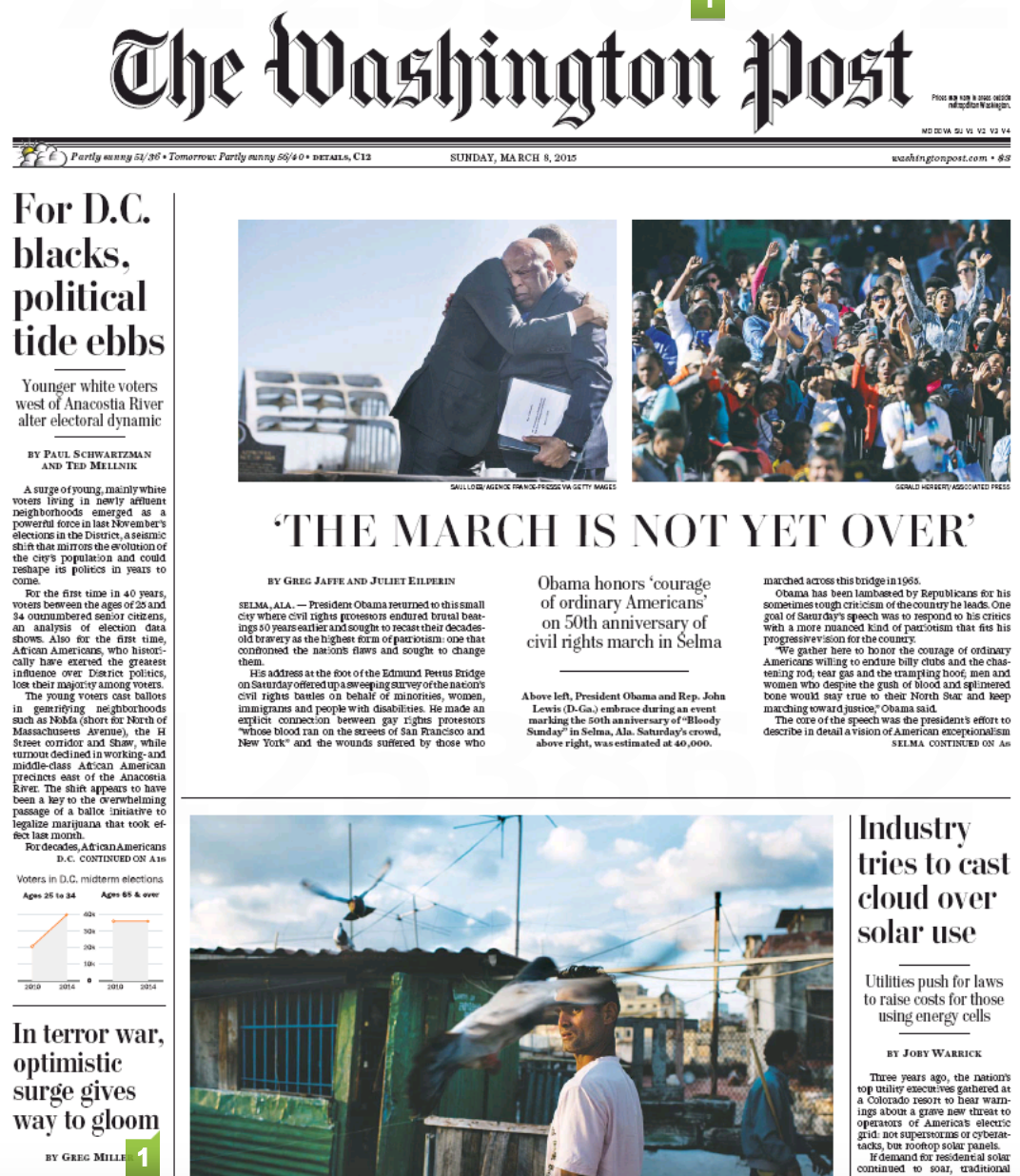 Utility trade association Edison Electric Institute (EEI) launched a multi-year campaign in 2012 to weaken solar energy policies across the country, as reported by The Washington Post. In 2012, during EEI’s “Board and Chief Executives Meeting”, top utility executives discussed an action plan to confront challenges posed by cheap solar power and to address concerns about profits in the face of new competition, according to documents uncovered by the Energy and Policy Institute.

EEI discussed a campaign to target state legislators, regulators, and advocacy groups to slow the growth of distributed solar energy. Two-and-a-half years later, evidence of the action plan can be seen in nearly two dozen states, and a regulatory effort has been partially successful in increasing the cost of solar for homeowners, according to the report in the Washington Post. 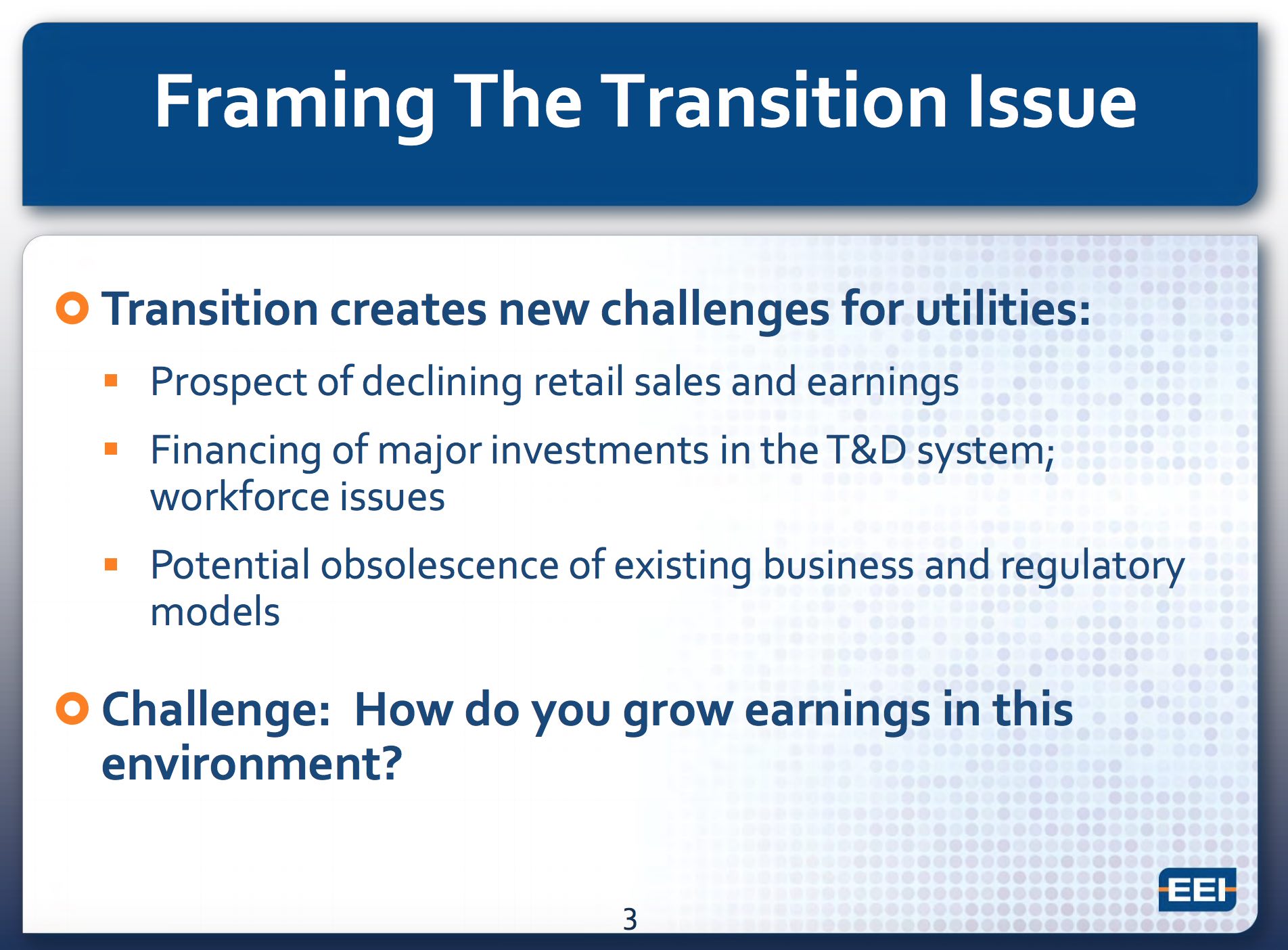 David Owens, Executive Vice President at Edison Electric Institute, claimed on-the-record with the Post, “It’s not about profits; it’s about protecting customers.” But as documents revealed by the Washington Post story show, these efforts are part of a coordinated campaign to maximize utility profits, not protect ratepayers. Owens’ presentation to EEI’s Board stated, “How do you grow earnings in this environment?” in reference to the increase in distributed solar.

Utilities make their money by building big, new infrastructure projects and then sending ratepayers the bill. This is exactly why utilities want to eliminate policies that encourage homeowners and businesses to go solar.

Independent studies show that rooftop solar benefits all ratepayers. Recent reports commissioned by regulators in Mississippi, Nevada, and Maine, as well as the state consumer advocate in Vermont, show that distributed solar produces benefits for all ratepayers. By installing solar, homeowners and businesses can help prevent the need to build new, expensive power plants and transmission lines; ease congestion on the grid; and help reduce emissions and pollution. All of these benefits provide savings to ratepayers, whether or not they install solar.

Furthermore, a recent post by the Institute for Energy Economics and Financial Analysis stated:

Rooftop solar provides substantial benefits for everyone, regardless of who installs it. It helps power the homes and shops that adopt it, to be sure, but it has far-reaching benefits for other customers as well…

No less a titan than Sanford C. Bernstein & Co., one of the perennially best-rated firms in Institutional Investor’s annual rankings of investment researchers, has studied the issue deeply over the past couple of years and comes away with an unequivocal take on the issue: Rooftop solar, aka photovoltaic solar, means lower peak-hour energy prices for all.

The report from Sanford C. Bernstein & Co. also notes that a four-fold increase of distributed solar on the California grid reduced system loads so much that peak prices were delayed until later in the day, when demand was lower. Lower demand means lower prices for everyone.

The facts haven’t stopped the utility industry from using talking points to spread falsehoods about solar’s impact on low income communities and electricity rates, even though these talking points are not backed up by credible data. As reported in the Los Angeles Times, and documented by Energy and Policy Institute, the utility trade association, EEI, is spending cash to convince low income and minority organizations to back utilities’ assault on solar:

The National Black Caucus of State Legislators and the National Policy Alliance, which represents the Congressional Black Caucus as well as some 10,000 black lawmakers in all levels of government, have backed model legislation imposing surcharges and limiting the appeal of net metering. Their proposals are almost identical to bills favored by big energy companies…

Tax records show [EEI] gave $10,000 to the National Black Caucus of State Legislators in 2013, the most recent year for which records are available. In the two previous years, the institute gave $17,500 to the National Policy Alliance.

We’ve tracked EEI’s contributions to minority groups and in total, the trade association contributed at least $160,000 in 2012 and 2013 (the most recent years available). Three of these groups have passed model legislation that is nearly identical to a model bill passed by the American Legislative Exchange Council (ALEC), which was sponsored by EEI. ALEC is a “corporate bill mill” that produces model legislation and facilitates lobbying of state legislators by special interests like EEI.

While EEI has attempted to influence minority leaders to support the utility industry’s efforts, Americans from a diverse range of communities are standing up to support solar. For example, the NAACP recently released a report detailing “the path to transitioning from energy production processes that are harmful to our communities” and a clean energy resolution to “improve the economic wellbeing of low income neighborhoods” through the deployment of clean energy.

And, because utilities are trying to squash free market competition, conservatives are joining the fight to protect solar. The Christian Coalition, a conservative group, recently wrote a blog post saying, “Indiana’s utilities are interested in keeping us reliant on traditional fuel sources that hurt our national security and weaken our economy. We must allow homes, businesses, public organizations, and churches to create local, American power by installing solar.” Debbie Dooley, a founder member of the national Tea Party, has launched a campaign for a ballot initiative in Florida that would allow citizens to purchase solar directly from private companies (a right that’s currently banned in the state). 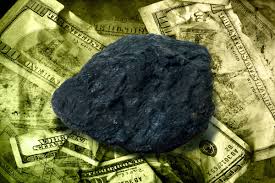 The reality is that the utility industry has launched a campaign using politics and backroom deals to try and squash their solar competition and preserve their outdated monopoly business model.

Case in point: EEI’s Owens even claimed in the Post that the industry is “pro-solar.” Sure, some utilities have taken initiative or responded to forward-thinking public policies (like renewable energy standards, which are also under attack by fossil fuel interests) and integrated solar into the grid. But other utilities have attempted to monopolize ownership of solar systems and prevent third-party competitors from operating in their service territories in Washington, South Carolina, Arizona, New York, and Indiana.

Utilities should be taking leadership to transition towards a clean energy economy, by exploring new business models to integrate more energy efficiency and distributed renewable energy into the grid. As the Ralph Izzo, CEO of New Jersey-utility Public Service Enterprise Group, and Julia Hamm, CEO of the Solar Energy Power Association (SEPA) said in a letter to the Washington Post, “With both energy efficiency and solar, utilities can play a critical role in expanding programs and making them available for all consumers.”

As the price of solar continues to plummet and energy efficiency solutions become more plentiful, utilities will need to innovate, instead of fighting to preserve a 20th-century business model that relies on centralized fossil fuel power plants. Hopefully, utilities will embrace the future instead of fighting to preserve the past — only then can they play a constructive role in providing our nation’s power in the 21st century.