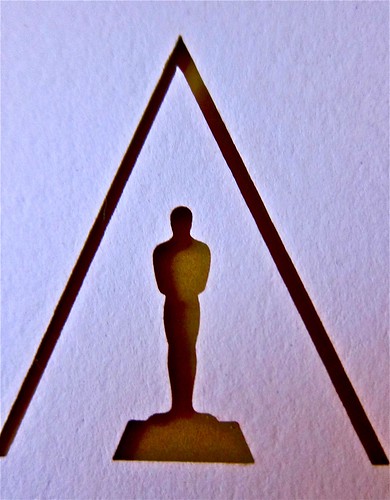 all photos from the Academy

Those of us who are streaming new episodes of Netflix’ House of Cards are all seeing the brilliance of Kevin Spacey as President Frank Underwood. And last night he did an hour long interview with Charlie Rose. Sardonically witty, smart, funny and utterly charming…..never at a loss for words or expressions. I suddenly realized what a fabulous host he would be for the Oscars next year. The Board of Governors of the Academy of Motion Pictures Arts & Sciences (AMPAS) are meeting at our building on Wilshire on March 24th to review the facts and foibles of this year’s show and make the changes necessary to keep the Oscar show relevant and watchable. I have been a member of this august body since 1972, when the film that I produced, Lady Sings the Blues, received five nominations. I have been a proud gadfly all these years, pushing here on Huffington for changes to make the membership more representative of the world cinema scene….more women and minorities, more members from the world community, more pizzazz. We needed more transparency, letting the members and the world know what actions were being taken and why. That’s slowly happening….slowly. So here is my two cents on ideas to improve the Oscar show and move it into the future. 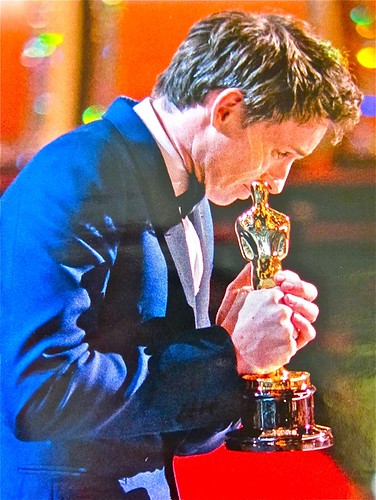 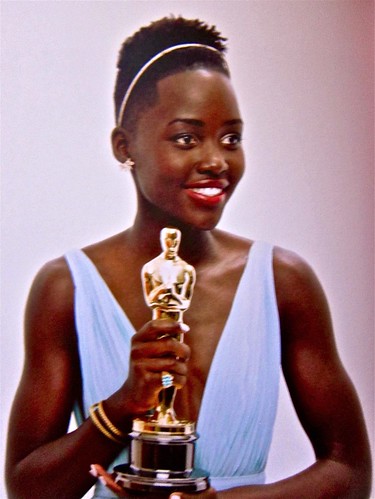 ..and my favorite award, Lupita Nyong’o.

First of all, a new producer. No disrespect to the two guys who did the last few shows….they strove mightily against heavy odds. But we need a spectacular showman for the next adventure, someone like George Schlatter, the Laugh-In guy. Fearless, funny, imaginative and not afraid of failure. I’m going to hear my friend, Norman Lear, speak tonight at the Wallis….and at 92 he may be too tired to do it, but that’s the kind of offbeat guy or girl we need to helm the production for awhile. George Lucas, Steven Spielberg, George Clooney, where are you? Or even better, get Scott Rudin to do it. He performs magic every year on his own. (Even Harvey W. would do a better job.) 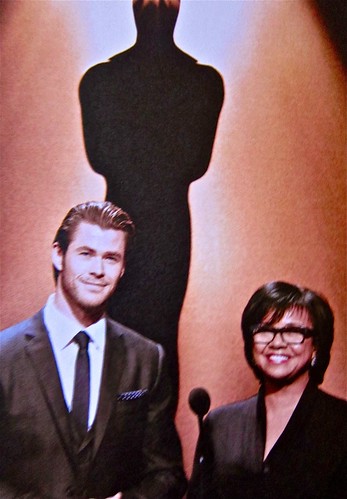 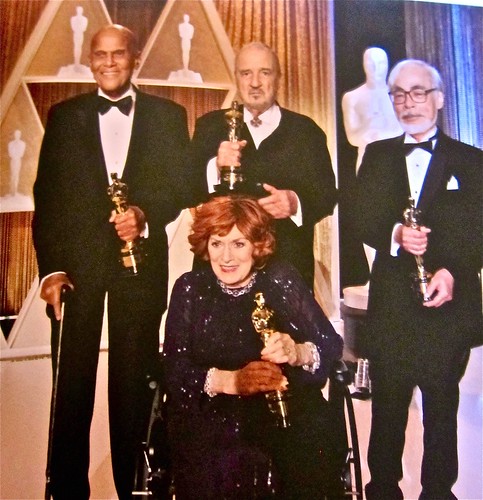 The recipients of this year’s Honorary Oscars.

I have great personal interest in the technical awards….the costume and production design, the hair and makeup, but regretfully they should be moved to a non-TV event earlier in the day, much like the sound and lighting awards are now. I am of two thoughts about the awards for short subjects and such, probably have to go for the time being. People/viewers are interested in the big ones….the pictures and actors, the songs and music and perhaps even the photography. Feature documentaries, yes, but the others…..gone from prime time. Our target should be a show running 2-½ hours….perhaps stretching at the most to 3 hours, but not beyond. Which means that we go back to having five nominees for best picture, not eight or ten. And we members must rethink our criteria for selecting those pictures…of course box office success is not the sole criteria, but it should enter into the selection process. Lord of the Rings deserves our respect and attention. 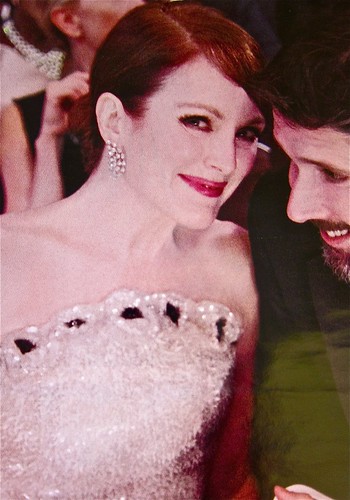 Julianne Moore at the moment of her annoucement. 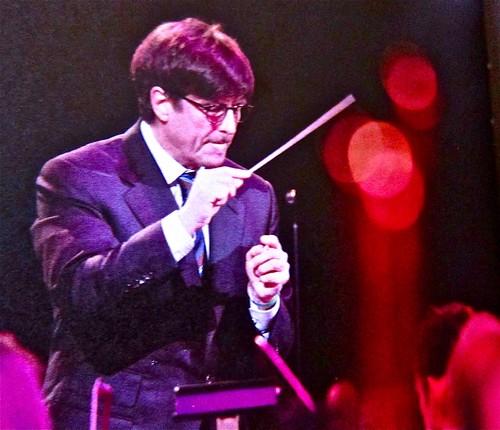 I have given some thoughts about the structure of the night….should we perhaps join with the fledgling new Hollywood Film Awards (which just got TV exposure) and preempt some of the fun of the Golden Globes, where we sit at tables and imbibe food and beverages? No, I don’t think the Governors would consider that…but it should be thrown into the pot. But I do want more, many more clips…of past winners, of past award shows, of our wild, proud history. The Lady Gaga ‘Sound of Music‘ segment was the most tweeted one of the night. More of things like that. I want to see current happenings, things which occurred during the year which would make us laugh and cry. More clips of stars in unguarded moments. You get the idea…go Super Bowl razzle-dazzle to some degree. The nominated songs only, preferably performed by their creators. The single most interesting and exciting events in the show are the acting awards, and they should be expanded. And spread through out the evening. Maybe drama and comedy acting awards…take a page from the Globes. The more acting awards the merrier. Keep the director, original and adapted screenwriter awards as they are now…but again, more and longer clips from their efforts.

The 88th annual Academy Awards should be a scintillating, spectacular and fun show. I want to see stars, more stars, the big stars. Yes, Nicholson in the front row….and Warren Beatty with his lovely Annette. Clooney and his wife in a segment. Meryl, always, but all the others. I know Woody, and he is reluctant to show up…..but at least try to get him to do a segment. I have gone on record that I hate the Honorary Awards Evening, which is not telecast. It is an insult to all of the members who won’t/can’t spend the hundreds of dollars for tickets to see three or four people get honored. Roger Corman is my close friend, but I didn’t spend $350 for a ticket to see him honored. And, as I wrote, knowing Roger’s parsimonious ways, he wouldn’t have spent it either. Go back to giving a few Honorary Awards during the show to the legends…with clips as to why they were selected. I remember the Hollywood Reporter saying, “The audience the Academy hopes will tune into the Oscars has little or no interest in Oscar-type films.” Sad but true, so let’s face it. Marvel’s Guardians of the Galaxy is where it’s at. So, as the trade paper suggested, this year the Academy must wield an Uzi, not a scalpel. The magazine suggested that the talent be paid. I never thought much about that….figuring the host got an honorarium but nothing more. But HR said that we should consider spending a million bucks to get a top name….say Tina Fey, Jon Stewart or Ellen again, though I think Kevin would do it for a lot less.

My nephew, Brad Weston, and his New Regency Films, have just finished shooting a wilderness/vengence movie starring Leonardo, with the Birdman director helming….and I am sure it will be a top contender next year. But…I would have loved to see some footage from it at this year’s show. So next year let’s get the major studios and independents to send us some footage of some of the films being shot…a preview which they would love and we would find interesting. Keep the In Memorium segment, but expand it. It’s fascinating…..we see beloved talent for the last time, and I never can look away. (Yes, Joan Rivers should have been included.)

There’s a whole wide world of film out there. We are supposed to be an international body. So I want to see more foreign film influences. Not a lot…but more than we have now. This year there was a Hungarian film entry called White God, and it ended with the most amazing scene I have ever seen in a film, 250 dogs sitting in a circle around the little girl of the movie. Showing that would have wowed a worldwide audience. The Academy needs to be thinking outside of the box if we want to remain relevant.