Mohammad Hanif — the darkly funny and talented Pakistani writer — was once asked whether Pakistan’s violent and often oppressive political system was the reason the country was producing such fine novels. You know the expression — the worse the place, the better the literature. Possibly, Hanif replied, but I’d rather have peace and bad books.

In the age of short memories and twenty-four news, constantly being updated and refreshed, Pakistan gets a rough going in the media. Seen only through the lens of terror and extremism, nearly two hundred million people are reduced to beards, guns, and shallow feel good stories. If the news isn’t about an Al Qaeda hide out in Peshawar then it’s about a fashion show in Karachi. (Pakistanis! They’re just like us — they like clothes!)

Anyone who has picked up a book in recent years will know that Pakistani writers are extraordinary. They are the keenest observers of this complicated country of ours; they are honest, curious and self-critical. The best investigate essential human stories, bypassing tired news headlines to portray a world otherwise unseen. And they do with wit, razor sharp prose, and a fine sense of negotiation.

My novel, The Shadow of the Crescent Moon, is set against the backdrop of the insurgencies in Pakistan’s tribal region, near the border with Afghanistan. It’s a story about three brothers that takes place over the course of one day. (For me the heartbeat of the novel are two women — Mina and Samarra — and how it is that women live and struggle through the turbulence of today’s Pakistan).

If I had to choose, I’d also have peace but there are an awful lot of good books too. Can’t we have both? Below are four fine novels by Pakistani writers: 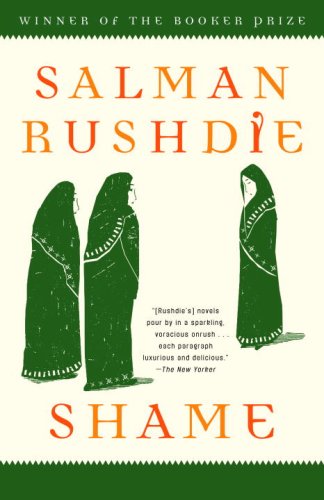 Shame by Salman Rushdie
If I had to pick my top classic novels set in Pakistan, I’d start with this incredible political novel, one that along with the author’s other books unfortunately cannot be bought or sold in Pakistan. “Shame is like everything else,” Rushdie writes, “live with it for long enough and it becomes part of the furniture.” Beautifully written, Rushdie’s novel dances between the military and the civilian, telling a real life story through fables and the violence of Pakistan’s very recent history. It’s a book that everyone, especially Pakistanis, ought to read, if only to be confronted with a question that haunts us today, decades after the book was published — does history belong to only those who live it?

The Crow Eaters by Bapsi Sidwa
Sidwa is one of Pakistan’s most beloved storytellers. She has a raucous sense of humour and captures a long ago Pakistan, setting her story of Freddy Junglewalla in pre-Partition Lahore. Come for Freddy — Parsi, entrepreneur, fraud, and arsonist — but stay for his “tank” of a mother-in-law Jerbanoo.

A Case of Exploding Mangos by Mohammad Hanif
During the real life martial law of General Zia ul Haq, journalists that questioned the barbarous military junta were publically flogged, federal laws were set in place that proscribed the death penalty for adulterers (these laws remain till this very day), and the military detained and executed thousands of Pakistanis over an eleven-year period. Only a writer as skilled as Hanif could weave a tale about the dictator’s eventual murder (his plane exploded mid-air), suicide, adultery and our predilection for conspiracy theories and still have it be hilarious.

Kartography by Kamila Shamsie
I read this novel while studying in New York. It recalled Karachi so vividly for me, so clearly, I suffered a spell of intense homesickness while reading it. A story about home and friendship, it’s set in the shadow of the 1971 war that split East and West Pakistan. It’s the only novel written in English to address the war that divided Pakistan that I know of (East Pakistan would go on to become independent Bangladesh). Though Shamsie has gone on to write many more novels, this is a fine introduction to her work and also to Karachi, a spectacular and strange city.

Fatima Bhutto is the author of The Shadow of the Crescent Moon.
Source: Huff Post

Is It a Crime Doing Business in Crimea?